A new generation for Europe

On 1 May 2004, ten new countries joined the European Union. Through a series of portraits I attempted to show the young faces of this “new Europe”. This is the generation that will actually grow up, study and enter active life while – hopefully - enjoying its EU citizenship. 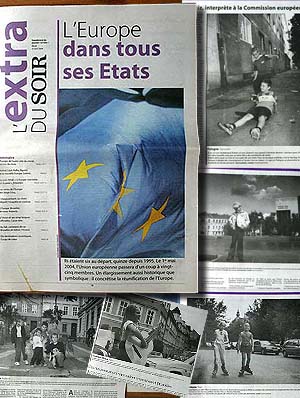 This series was publised along articles about each country on 27 April 2004 in the Belgian daily Le Soir, in a supplement about the enlargement called "L'Europe dans tous ses États".

The photos were taken between the 5th of August and the 17th of September 2003 excepted the one from Cyprus taken on 19th of December 2003. The children featured in this project were about ten years old. I met them in outdoor urban spaces close to their homes. They, and their parents, were told of the project's approach. After taking a few shots I would ask them about their activities, family, tastes and ambitions.

Over the summer 2003, I was commisionned by the European Movement to make documentary films about the 10 new countries. I took the opportunity to make these photos on the run.